Last year, Wake Forest embarked on the first phases of a project to install StormPave® pavers on its campus in Winston-Salem, North Carolina, both in keeping with the university’s red-brick architectural heritage and to find a better way to manage stormwater.

This summer, Wake Forest has good reason to think about managing stormwater: 8.37 inches of rainfall so far, which is 4.64 inches above normal. Once the StormPave pavers are in, they can handle that much rain and much more.

Ryan F. Swanson, university architect, says the installation took place on several sites, roughly centered in the Farrell Hall and Wait Chapel areas on campus. The new pavers include a 24-foot-wide plaza on the east side of Farrell Hall, which houses the university’s school of business.  That plaza encircles most of the building and extends out to the Polo Road entrance. Sidewalks are being extended at the still-in-progress North Dining Hall, due to open in December; and the Dogwood and Magnolia residence halls, due to open in 2014. A new 150-yard walking path will allow students and visitors to make their way from a parking area to Wait Chapel.

Crews from PDC Hardscapes and Fred Adams Paving Company worked between rain days to get the multiple projects on the campus completed before their “final exams,” on August 22, the day students move in. 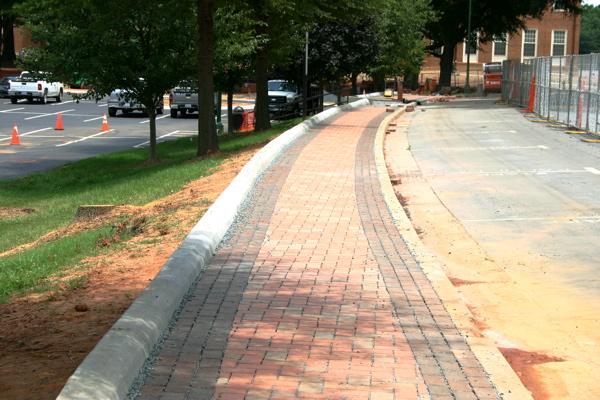 As before, the newest projects concentrate on three things: aesthetics, practical design and available space. Aesthetically, the StormPave® pavers are virtually identical in appearance to Pine Hall Brick’s English Edge conventional pavers, which have been installed nationally for decades. 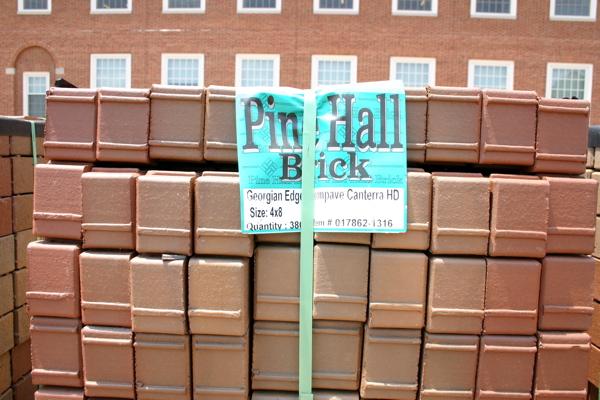 From a practical standpoint, the design was part of a larger effort on the university’s part to meet Winston-Salem’s stormwater mitigation requirements. It’s well known that with property that’s paved over – whether a large shopping district or a university campus – the rainfall has nowhere to go. The excess water can cause a surge downstream that can cause erosion, flooding and property damage.

As a result, cities and counties now require owners to install stormwater management mechanisms, such as permeable pavers and other means, to keep more rainwater on site and return downstream flows closer to a volume that would occur naturally.

The StormPave® pavers aren’t the only stormwater control measures on campus. Earlier, two large concrete cisterns, capable of handling 110,000 gallons, were installed under the parking lot at the Byrum Welcome Center to collect and then dissipate stormwater at a slower rate. The cisterns are used in conjunction with three bioswales – hollowed out earth areas – to slow water flow into Lake Katherine and Silas Creek. At the new South Residence Hall, two bioswales were created that collect rainwater in a crushed rock bed that’s 5 feet deep. There are also several in-ground mini-cisterns with a rock filtering system connected to the stormwater system under Jasper Memory Lane.

Bioswales work well, but they do take up a lot of real estate, which is at a premium on college campuses. Swanson says the new installations on north campus represent an opportunity to move away from large, land-consuming projects and toward cost-effective permeable pavers.

Rainwater filters through the field of bricks and is then absorbed by 18 inches of aggregate beneath them. The aggregate keeps the pavers stable, while acting as a reservoir of sorts to hold the rainwater while releasing it slowly to the ground underneath. 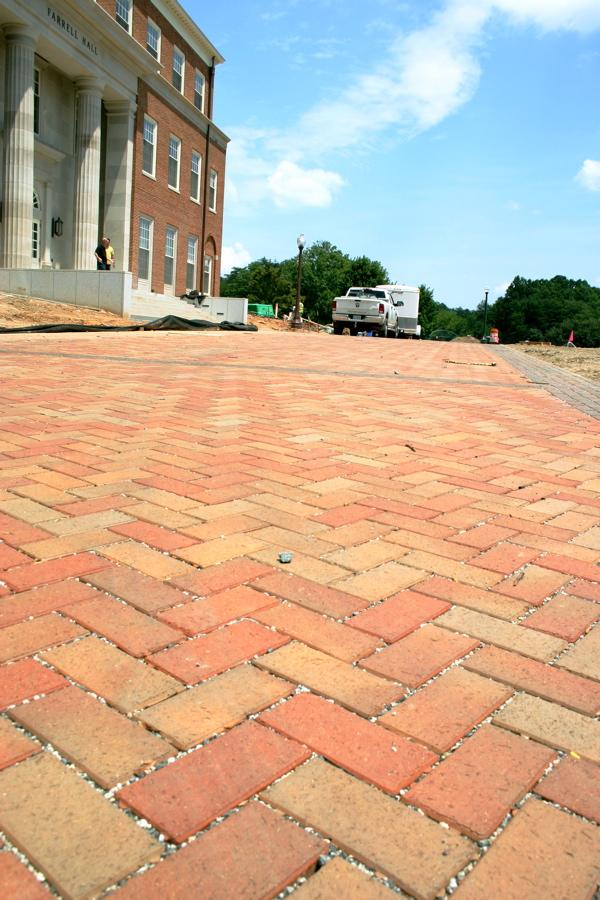