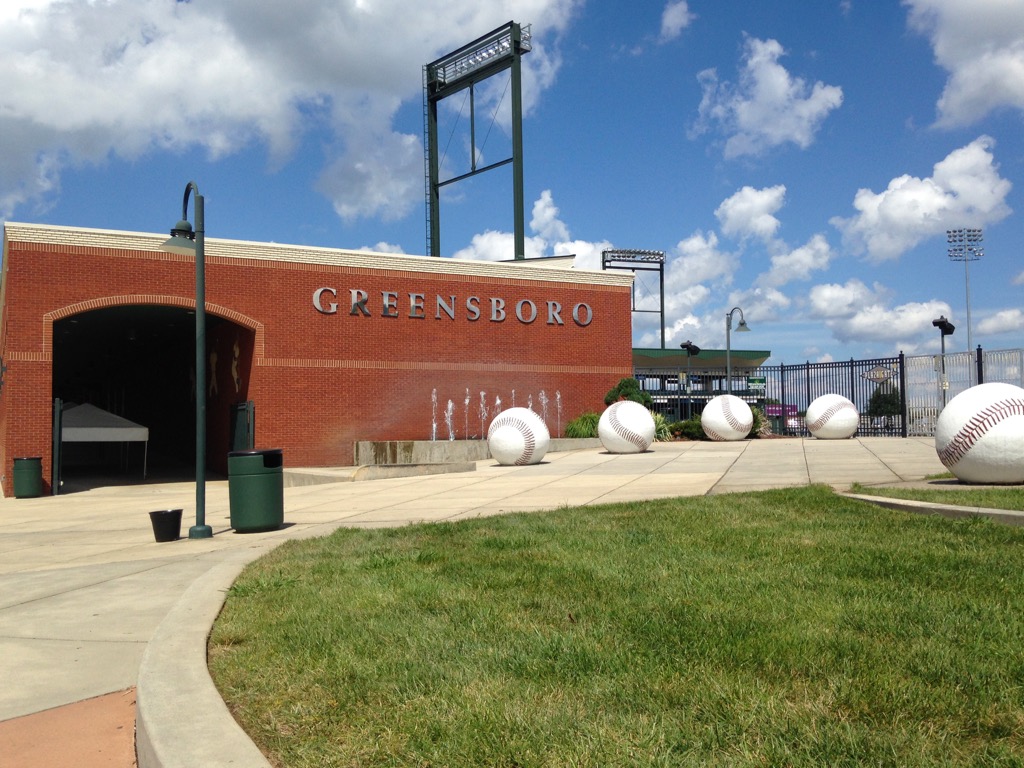 In downtown Greensboro, North Carolina, everything’s coming up red. And brown. And beige. And a host of other colors in between — the clay brick pavers in a full range of colors in walkways and patios; the face brick in the vertical walls of newly built apartment buildings and breweries.

Much of it, as it turns out, is from around here. Much of the clay pavers and face brick was manufactured just down Battleground Avenue and US 220 North, 25 or so miles through the North Carolina countryside, at Pine Hall Brick Company’s plants in Madison, North Carolina.

Arguably, the building boom in downtown Greensboro began in earnest with the 2005 opening of Yadkin Bank Park, home of the Greensboro Grasshoppers, a Class A affiliate of the Miami Marlins baseball team. 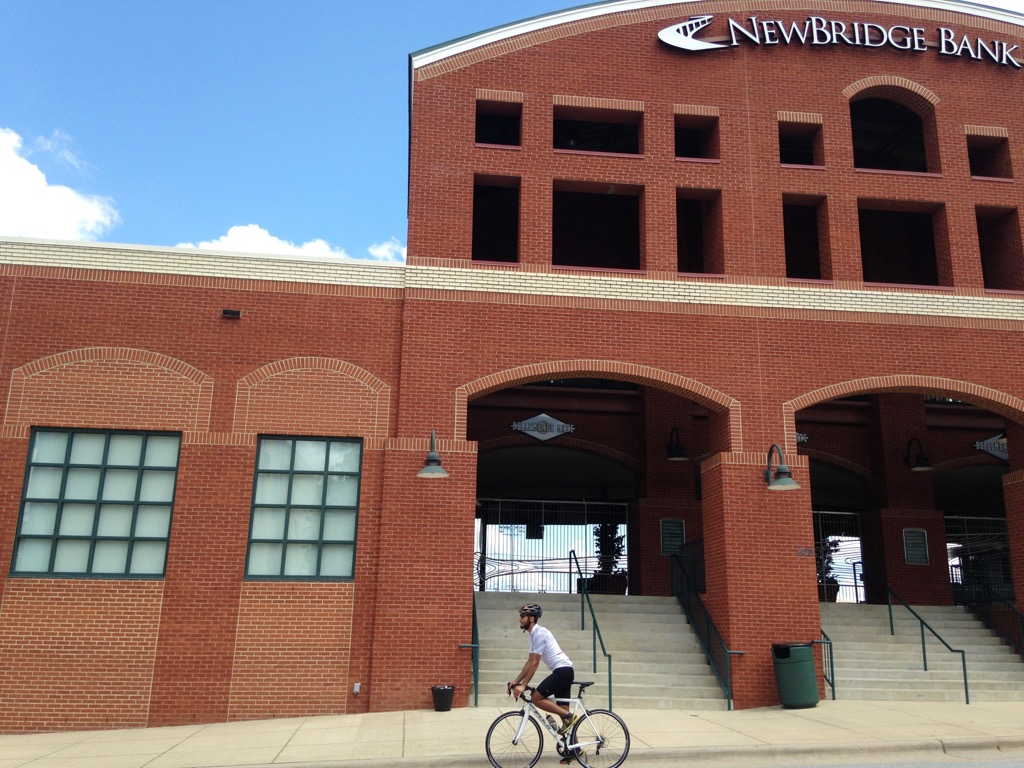 The stadium of red brick and wide concourses is intentionally reminiscent of classic open-air ballparks of the past. If you were to stand at home plate and walk to the outfield, you would see the site where a former car dealership’s building was demolished and in its place, the four-story Greenway at Stadium Park apartments went up. 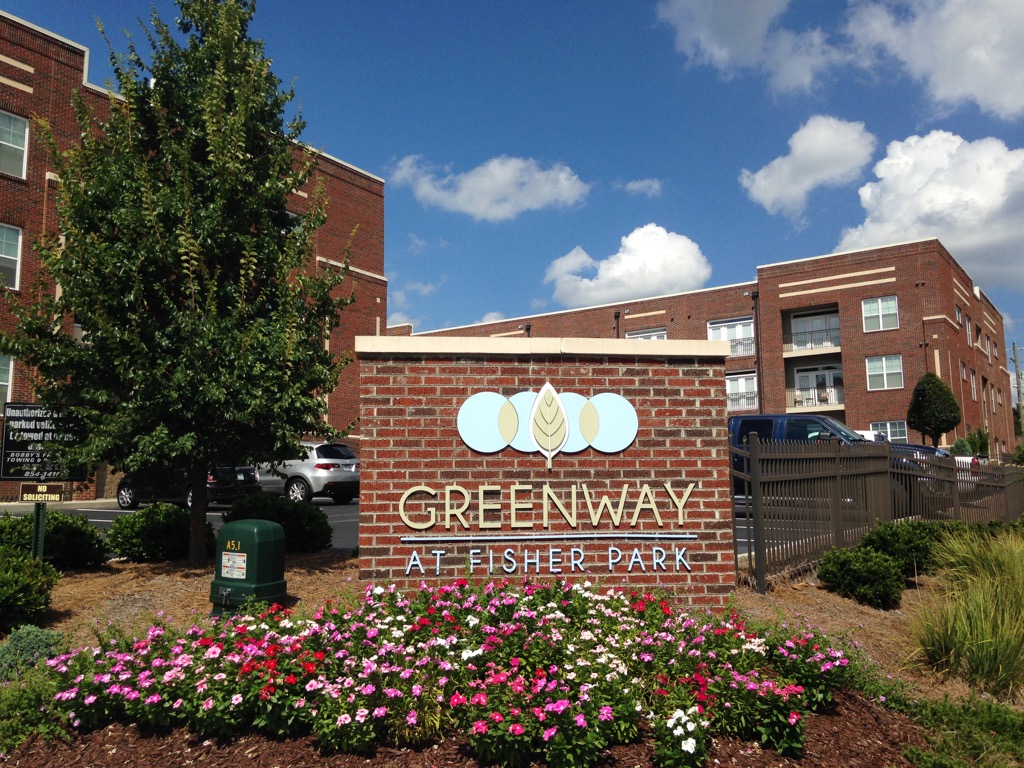 There and across the street at Greenway at Fisher Park Apartments, the tenants are mostly young professionals and students at nearby universities, many of whom can’t recall the flight from downtown to outlying areas and the shuttered buildings which were left in their place.

“All of downtown is moving in the right direction, which is good to see.”
—Eric Bradley

Unlike more conventional neighborhoods, these new residents can leave their homes, walk a block and attend a ball game; or walk a block in another direction and pull up a stool at Joymongers, an innovative brewery that in good weather throws open garage doors and brings the outside indoors.

Dean Schimmenti, an architect for Bradley and Ball, worked on the design of Greenway at Stadium Park, with the main idea being to echo, in a visual sense, the classic lines and architecture of the ballpark. 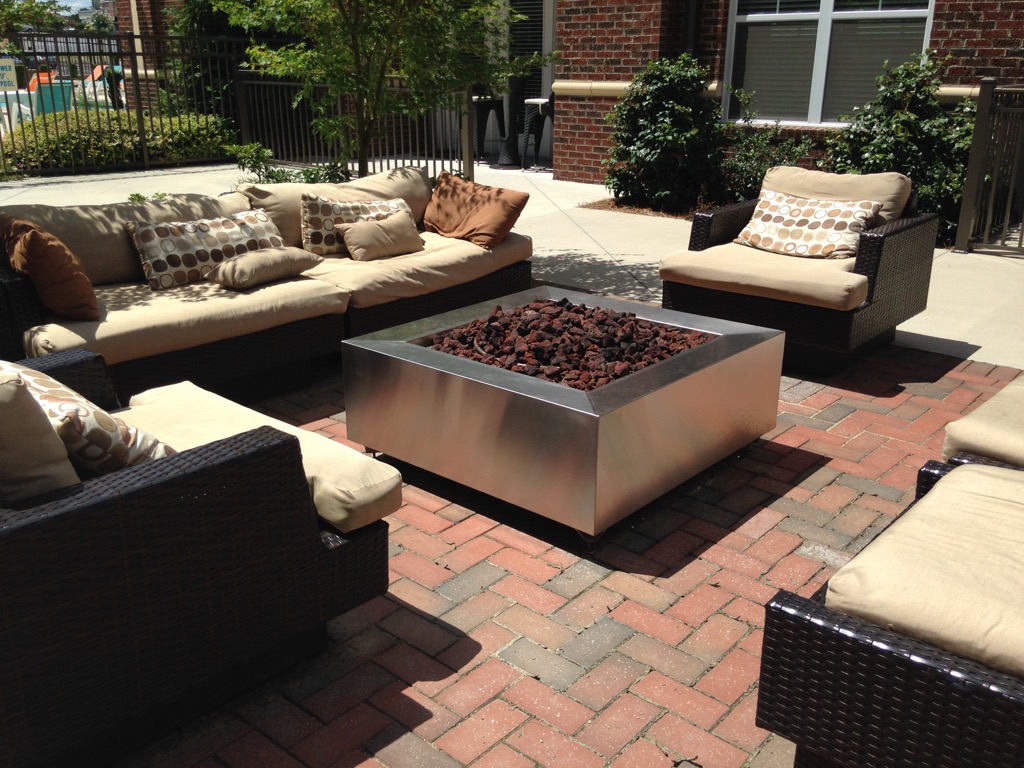 The deep, reddish brown brick exterior was purposefully selected for the complex and for the Greenway at Fisher Park across the street. Both projects were designed to complement the brick at the ballpark and to look as though they had been there for years.

“On that project, we have an amenities area on the first floor that opens up to a pool and outdoor cabana and on the fourth floor, we have a cantilevered floor and lounge that overlooks the baseball field,” says Schimmenti.

Architect Eric Bradley, who is a partner in Bradley and Ball, said the design’s main theme was to serve as a transition area between downtown and Fisher Park, a 1920s-era neighborhood with Craftsman-style bungalows and brick apartment buildings, a mix of restored single-family homes and rental properties, many occupied by college students. 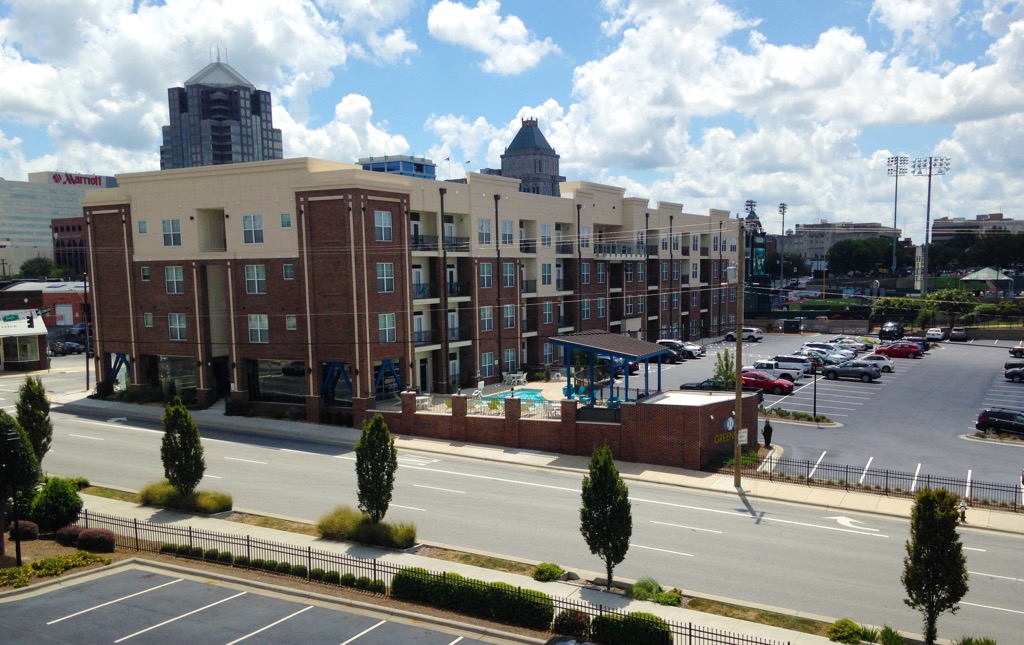 “We really took our cues, both from the red brick at the ballpark and the traditional homes in Fisher Park,” says Bradley. “It really is for people who live, work and play downtown. If I were single and 30 years younger, that’s where I would like to live.”

While the apartments near the ballpark are where many live, Joymongers is where many go to have fun. Mandy Clift, an architect with J. Hyatt Hammond says that in addition to fitting in with the neighborhood and looking as though it had been there forever, the site itself helped the design team make its decisions as to how the project would finally appear. 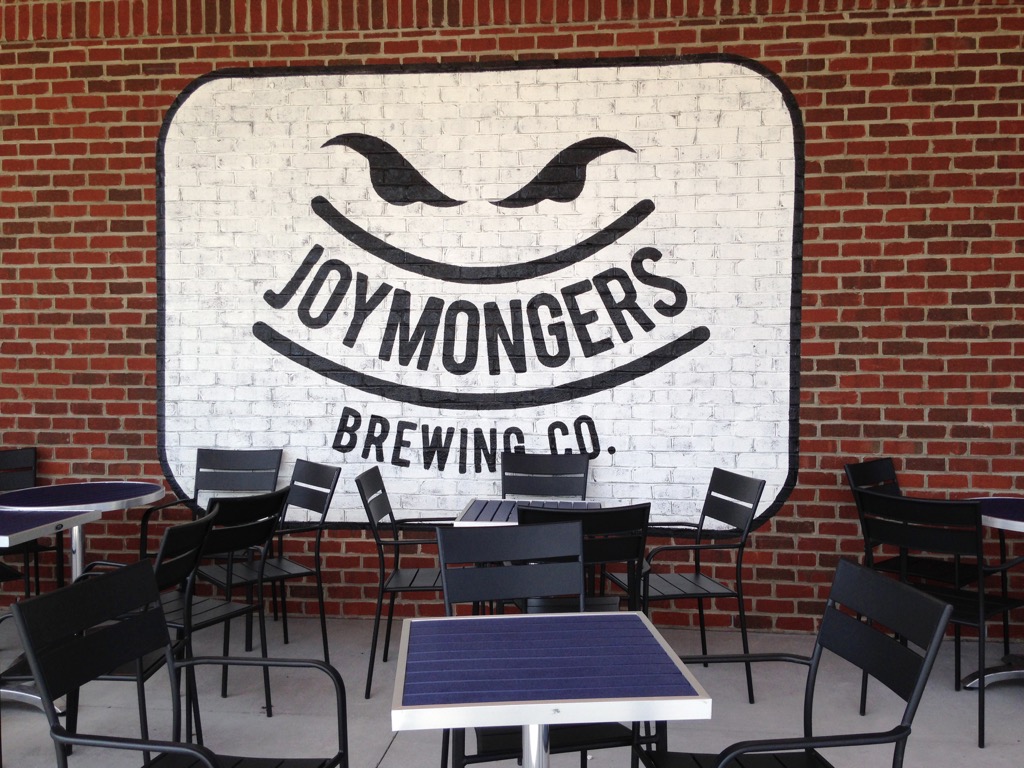 “It really had a lot to do with the siting of the building and the patios, because the one side where the street is closed will be a City of Greensboro park in the future,” says Clift. “We also knew we would have a lot of art and signage on that side of the building and we put in recessed areas that would frame that art and that would mimic the opening of those garage doors.”

“We really took our cues, both from the red brick at the ballpark and the traditional homes in Fisher Park.”
—Eric Bradley

The patio, which was designed to provide access to food trucks, the awning that has a unique angle to it, the garage doors which provide a way for a band to play inside and for the audience outside to be a part of it, all relate not only to the design but to the experience, the architect said. 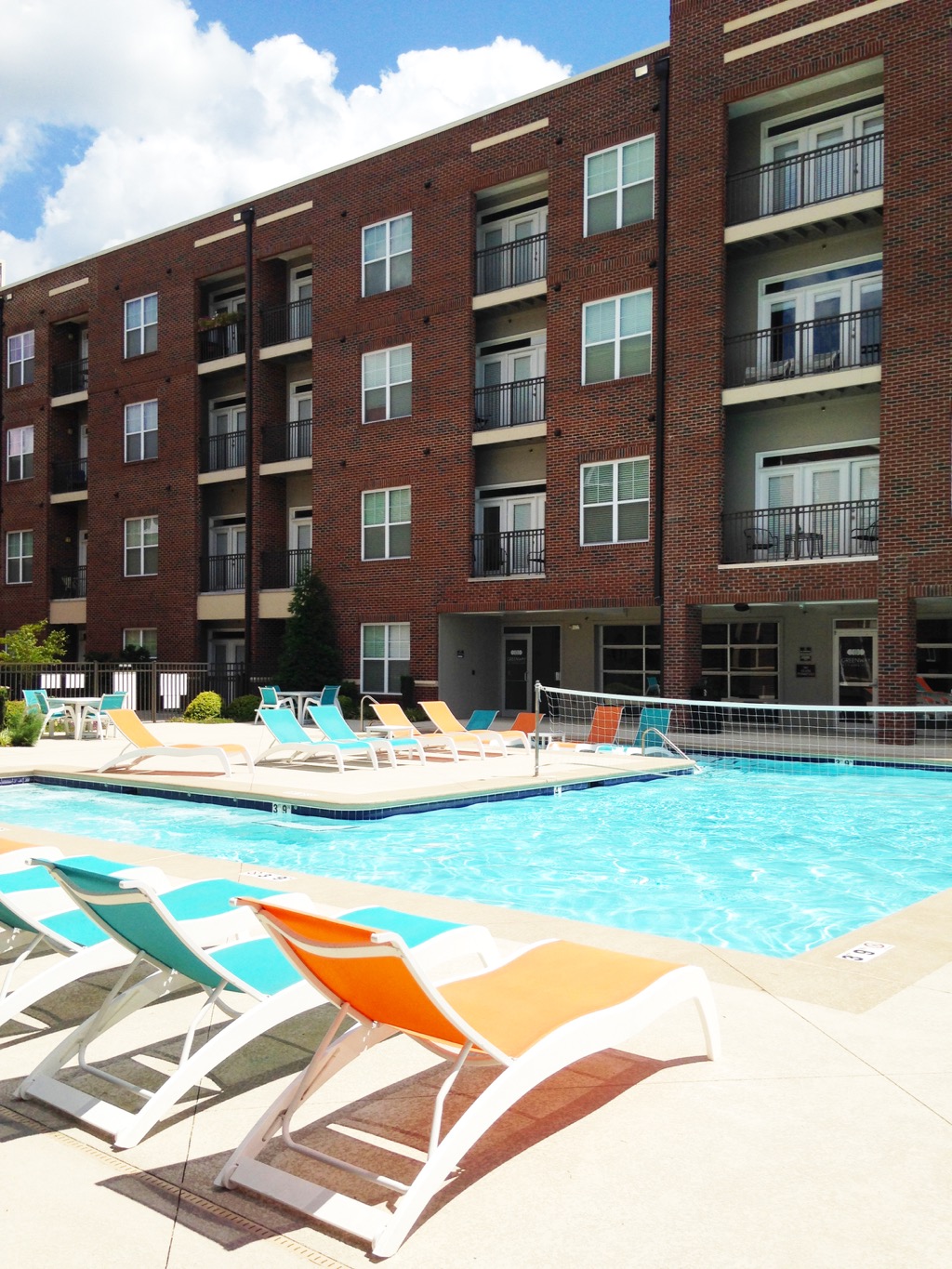 “This is authentic in that it has an Old World feel to it, the brick was tumbled and has broken edges, meaning that it has more character and looks like an older brick,” says Clift.
Clift notes that the placement of an open air brewery just off a planned Downtown Greenway even provides a public service: If you walk, run or bicycle, especially on a summer evening in North Carolina, you gotta have a place to stop and rehydrate.

“Whenever I was younger, I didn’t come downtown to hang out, to shop or to eat,” says Clift. “I am glad to see it evolving the way it is.”

Bradley agreed. Both these projects – and others in downtown Greensboro – are a sign that downtown is on its way back.

“All of downtown is moving in the right direction, which is good to see,” says Bradley. “I have lived here long enough to remember that downtown is someplace where you didn’t go unless you worked there.”