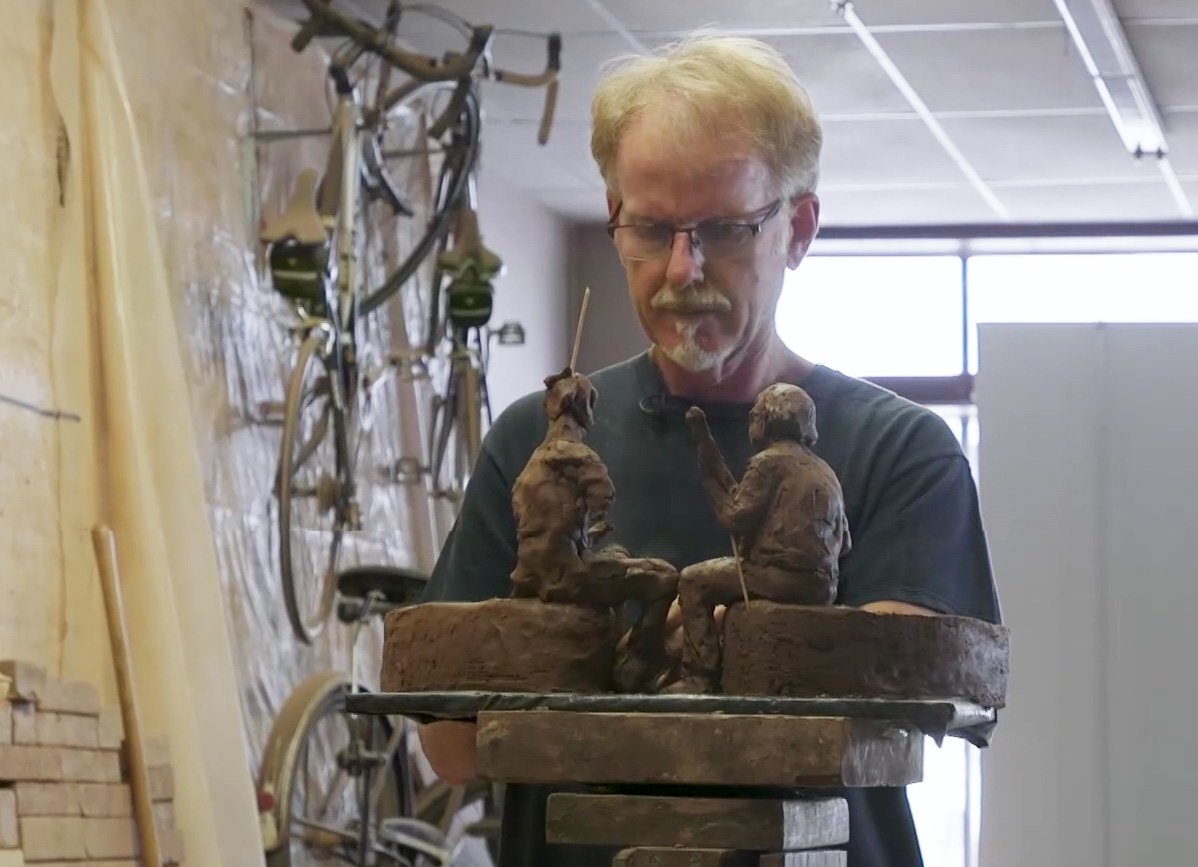 UNC TV – Public Media North Carolina devoted an entire episode of its MUSE series about art in North Carolina, to sculptor Brad Spencer and clay statues of musicians Joe and Odell Thompson that were completed and placed in a public park in Mebane, NC.

We were happy to see it.

Brad Spencer has been a friend of ours for years. Several months ago, we wrote about his contributing several sculptures to a new development called The Brickyard in Cary, NC. And before that, we wrote about a sculpture that he did as part of a public art installation in Gastonia, NC.

Spencer visits us regularly to get clay from our paver plant in Madison, NC and takes it home to his studio in nearby Reidsville. Once complete, he brings it back to us to fire in our kiln. From there, the individualized pieces are installed on the jobsite by Spencer and by skilled masons.

This UNC TV MUSE episode is a deep dive by videographer and producer Morgan Potts into Brad Spencer’s creative process, his research into the subjects, and the way he carries out the work of taking a piece from idea, to miniature model, to completion.

In the case of Joe and Odell Thompson, Spencer worked from photographs and videotapes of the two performing. Within the documentary, Bob Carlin, a writer and musician, added context and explained the Thompsons’ influence on music in the area.

“It’s all there, it’s all stored there. You take something as seemingly inanimate as brick and you turn it into something that is alive.”
Brad Spencer, Brick Sculptor

Masonry magazine reported recently that Spencer works with blanks out of raw clay with a face that looks like an 8-inch brick, but which can be up to 12 inches in length. The blanks are made in our plant in Madison, NC, loaded onto wooden pallets, wrapped in plastic and delivered to Spencer’s studio in nearby Reidsville.

There, Spencer stacks up the blanks with clay spacers just under a half-inch thick, which is the same dimension as a mortar joint. The magazine reported that once Spencer has completed the sculpture, he numbers each piece and takes photographs to document where everything goes.

The sculpture is taken apart and taken back to the Pine Hall Brick plant, where it is fired in our kiln, before being shipped to the jobsite.

There, brick masons work alongside Spencer to use the same mortar and bricklaying skills they use to build a wall to put the sculptures back together again.

In the documentary, Brad is shown in a darkened room, lighting the sculpture and adding in details with brushes, razor blades and knives. The object is  to keep from having any flat spots that would stop the eye from seeing. He speaks of how a sculptor’s experience plays into the finished work, of how you’ve been there before, how you’ve managed to resolve the challenge in the past and how you can do it again this time.